Summary of experience // Temperament of Space @ Dawn of Summer event 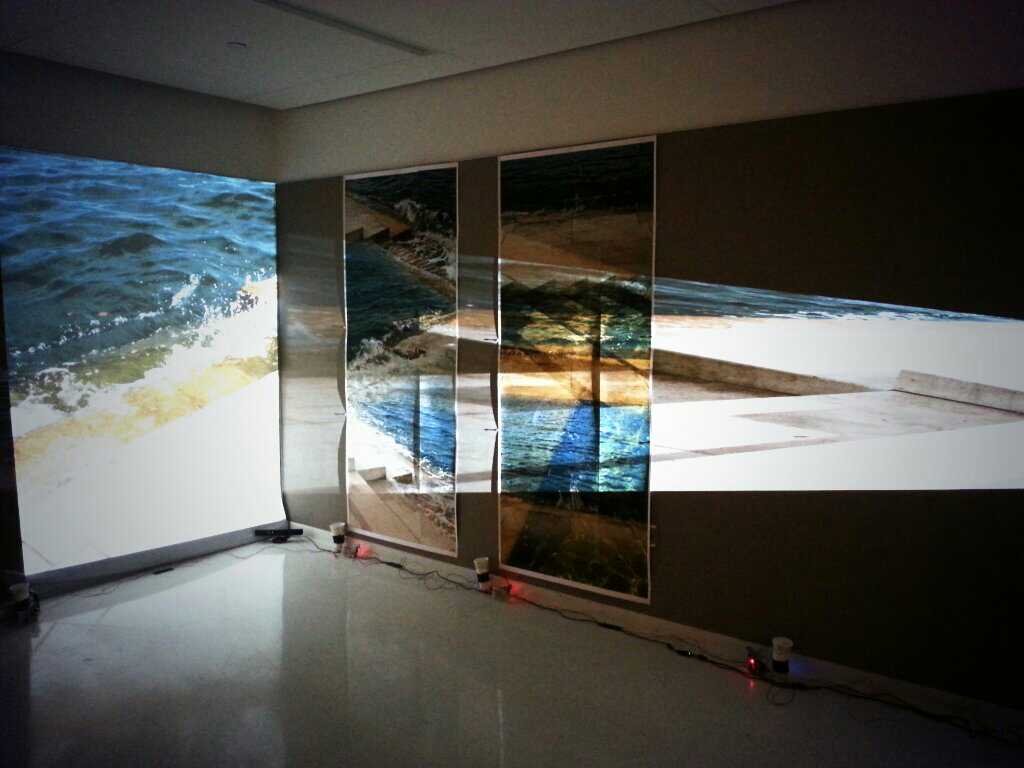 I just wanted to send along a quick summary of my experience with Curiosity of Temperament of Space during the Dawn of Summer event at The New School University Center on Friday 5/1, specifically highlighting areas where I feel the piece was really successful, our challenges where the piece might be able to improve, and other general observations.
I would estimate the age range of students who were experiencing the piece as 18 to 27. The ratio of female visitors to male is what I would call 3 to 1, for every 3 female visitors, there would be one male visitor. I would estimate the average length of experience with the piece at between 1 to 3 minutes, with the short outliers around 30 seconds, while the longest stay with the piece were two students constantly interacting with it for well over 30 minutes (more on these two later). In total I believe the piece saw between 60 and 70 unique visitors over the course of the 12 hours.
Feedback that I received from visitors was overwhelmingly positive. I took questions about who on campus was responsible for the piece, and found myself describing the nature of the research, and also the Public Interactives Research Team. Many visitors had specific questions about the technology and software that were employed, and how each were working in specifics to “see” or “detect” them.
< Successes >
Many visitors were drawn in by the visual aesthetics of the piece, to be pleasantly surprised by the interactive audio element. Many commented that the piece was “relaxing” and “meditative”, that the audio and visual elements were “beautiful”. Some visitors wanted to know where in the world the natural imagery was taken from. Some visitors, even though the interaction design meant that the interaction with the piece was “slow” rather than a direct mirror of their movements, wanted to DANCE in the piece. At least 10 visitors over the course of the evening did this. Watching these visitors, I got the sense that their perception was as if the piece augmented, rather than mirrored, their movement. One group of students, actors from the drama school, mentioned that the piece could function well as a teaching aid (act out what you see, and what you see acts with you).
< Challenges >
Many visitors had to be prompted to enter INTO the piece to interact with it. At one point, Dale taped arrows on the ground in an attempt to help people into the space, then into the piece to begin the interaction (unfortunately, it didn’t help much). I found that if I greeted guests and told them to walk in a general direction and that “something cool” would happen, visitors took that as a general invitation to enter the piece. I also thought that general instructions kept visitors in the space longer as opposed to directing them specifically and telling them what would happen.
< the Outliers >
Two Parsons fashion design students, undergrad juniors, one male, one female, spent a very long time with the piece, and in the room in general. Each of them commented that the piece was relaxing and that they enjoyed the pace at which the piece interacted with them. Each told me that they were very stressed out by their final projects and that the piece helped them to relax in a really engaging, but not ‘lame’ way. They made fun of the dance party happening in another part of the building, and that Temp of Space provided them with a great social/technological alternative. Them seemed to enjoy watching other visitors interact with the piece. The male student was very interested with the technology and commented that he wished the fashion department would incorporate reactive elements into their design curriculum.
< Suggestions for further development >
* a random mechanism with the audio distance detection, where once a users distance is detected the upper and lower bounds of the ultrasonic sensor are altered slightly (for instance +/- 5), to prevent users from finding a zone that does something specific. Essentially, to contextually randomize the experience further to promote further engagement and wandering within the space.
* We should consider strategies for shepherding users/visitors INTO the space, eliminating (or reducing) the need for a person to be there with the piece to guide visitors inside.
-David Wilson
Research Assistant
Public Interactives Research Team
Author archive

Field Research on Interactivity in the Wild, The Temperament of Space