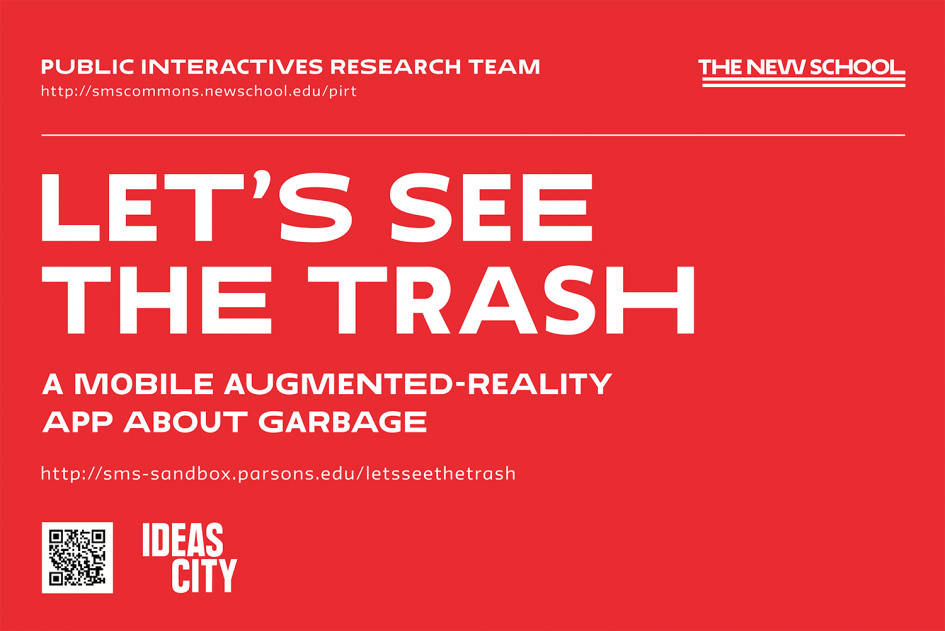 We learned alot about our Let’s SEE the Trash project by entertaining many visitors in our booth at the Ideas City Festival this past weekend.  In total, approximately 50 people visited us, who took roughly 30 of our bookmark business cards with QR code, designed by SMS graphic designer Chad Phillips.

We found it very useful being able to situate the project in public to discuss with visitors their impressions of what they thought our work would be based on how we described it. The process of our attempting to explain what the piece was, how it worked, and what the goal was in the greater context of the festival was very useful on our fine-tuning how we described the piece. Our description drifted away from mobile augmented-reality app towards location based documentary. Several visitors inquired as to whether we were able to physically track garbage across a large distance, or if we were able to obtain any data about the phenomenon we were attempting to depict. We were fortunate to be visited by a Department of Sanitation worker attending the festival, who provided us useful insight towards who to contact and how the department handles producing media pieces about their work. He stressed that the public should be made more aware about the process that garbage goes through after its initial disposal.

After our experience at Ideas City, the team feels that this was more a first iteration of the project rather than a finished product. That being said, we’re definitely proud of the technology we were able to develop for this first iteration of the piece that included: GPS detection and real time updating in a web based app using Google Maps API , applying custom map styling, geo-fencing points of interest, reactive points of interest icons, and custom video playback using YouTube API.  We plan to reach out to our new contact in the Department of Sanitation in an effort to involve them. Additionally, we think it would be beneficial to rework our description of the piece to that of a location based documentary. This describes more the intention of our piece given it’s current technological approach. In describing the project as documentary, the footage currently employed would need to be reconceived and reshot, most likely with the help of Red Dog Productions. Finally, we found that if we were to include a URL in our promotional material, that the URL be shortened by goo.gl or bitly.