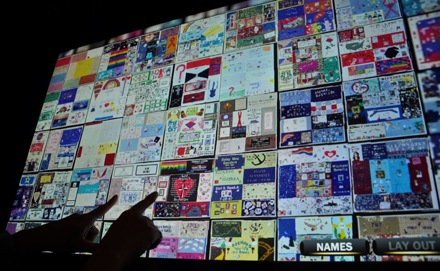 The AIDS Memorial Quilt is a unique work of international ARTS ACTIVISM that reflects the worldwide scope and personal impact of the AIDS pandemic.

The AIDS Memorial Quilt Digital Experiences were created in collaboration with Dale MacDonald from Onomy Labs, Julie Rhoad and Roddy Williams from the NAMES Project Foundation, Jon Winet and his team from the University of Iowa’s Digital Studio for Public Humanities (DSPH), and Andy VanDam and his LADS team at Brown University.

The aim of this project was to design a digital memorial using appropriate technologies that would augment the experience of viewing the AIDS Memorial Quilt. Created by the Public Interactives Research Team (PIRT) at USC, the work was supported by grants from the National Endowment for the Humanities Digital Humanities Office, Microsoft Research, and the USC Fund for Interdisciplinary Research. The experiences were exhibited as part of the 2012 Smithsonian Folklife Festival in Washington, DC.

The Interactive Tangible Browser for the AIDS Memorial Quilt enables viewers to SEARCH for a NAME that is commemorated on a Quilt panel, VIEW Quilt blocks, BROWSE a virtual “Quilt” that is composed of 5800 individual digital images, and ZOOM among different viewing distances: from a bird’s eye view to a view of an individual Quilt panel.

This digital experience was created in collaboration with Microsoft Research, under the guidance of Donald Brinkman, and Andy VanDam and his LADS team at Brown University.

This experience was created by Lauren Fenton and Rosemary Comella at USC in collaboration with Microsoft Research, under the guidance of Donald Brinkman, and Roland Saekow and Madison Allen from the University of California Berkeley (of the ChronoZoom project).

Many scholars and activists contest these “official histories” for the homophobic bias that sneaks into descriptions and accounts. For example, these official histories often refer to people who are infected with HIV as “AIDS patients” or even “AIDS victims.” These labels do not represent the identity of those who are living with HIV. The identity of “patient” is meaningful only from the point of view of a medical system. The term “victim” implies a state of powerlessness.The AIDS Quilt Touch Timeline enabled USC docents during the Smithsonian Folklife Festival to talk with visitors about the broader social, political, and bio-medical events that are part of the multi-faceted history of AIDS and the Quilt in the United States.  There, the docents were especially interested in taking into account the critiques of the way in which AIDS/HIV have been “narrativized” in the “official histories” of the epidemic.

In effect, the team created counter-narratives that displaced the figure of the “hero scientist” and the process of “science as discovery.”  While we noted the specific medical researchers who were involved in identifying HIV, we contextualized these accounts by including key episodes that highlighted critical acts of intervention — when activists confronted government officials and protested official policies.  The story about the history of AIDS/HIV that is not told enough, we believe, is the account of how the practice of medical science was actually transformed by the work of activists during the early days of the epidemic.  Remember that it was the work of an activist, not a government official or medical researcher, that prompted the RED CROSS to finally understand that its ENTIRE national blood supply needed to be screened in order to prevent transmission of HIV.

USC student and docent, Brittany Farr meets a young visitor who asks questions about the history of AIDS.

The mobile web app AIDS QUILT TOUCH enables a web-user to SEARCH for a NAME on the AIDS Memorial Quilt, VIEW Quilt Blocks, COMMENT on a specific panel or on the Quilt, and LOCATE the display of a specific panel during the Quilt 2012 events. visit:  www.aidsquilttouch.org

The AIDS Quilt Touch mobile web app was created by a team at the Digital Studio for Public Humanities at the University of Iowa under the direction of Jon Winet and Mark NeuCollins.

Each of these experiences illustrates the important role of collaboration among humanists and technologies in projects that take culture seriously for the purposes of technological innovation.

During the Quilt 2012 events, the USC docents often served as “digital quilt archaeologists” using the applications to find specific quilt panels, or in some cases to identify panels based on imprecise or incomplete information. Verbal feedback from visitors provided informal evidence that we had succeeded in meeting the basic objectives established for the Start-Up project: the interactives indeed “augmented” people’s experience of the textile quilt.

A woman weeps after viewing digital image of her husband’s panel displayed on the AIDS Quilt Touch Table and interactive browser, 2012

Anne Balsamo: Principle Investigator for grants from NEH, Microsoft Research, and USC. Currently Dean, School of Media Studies, New School for Public Engagement, New York. Formerly Director of Research in Public Interactives Team at University of Southern California. Balsamo has been involved in the project since 2002 when it was first conceptualized as a Project by Onomy Labs. Served as project coordinator and lead experience designer for Quilt Digital Experiences.

Dale MacDonald:  Currently serves as the Director of Creative Technologies at the School of Media Studies, New School for Public Engagement, New York. Formerly Chief Technology Officer, Annenberg Innovation Lab, University of Southern California. Co-director of the creation of the digital experiences for QUILT 2012 events. MacDonald has been involved in the project since 2002; serves as LEAD researcher for all digital experiences and project coordinator for all the tech teams.

Jon Winet:  Director of the Digital Studio for Public Humanities (DSPH), at the University of Iowa that provided the design and tech team that built the mobile web app AIDS QUILT TOUCH.

Mark NeuCollins:  Technical Director at the DSPH and for the mobile web app.

Andy van Dam:  Thomas J. Watson Jr. University Professor of Technology and Education; Professor of Computer Science.  He is the director of the Brown University Graphics Group and of the Large Art Displays on the Surface (LADS) project sponsored by Microsoft Research.

Alex Hills: Principle developer of the Interactive Quilt Browser on the LADS platform.

James Wren:  Senior Consultant, Microsoft Consulting services; responsible for all the visual processing of quilt images to create the database for the deep zoom experience.

Julie Rhoad:  President and Executive Director, The NAMES Project Foundation, Atlanta, Georgia.  Provided the invitation and opportunity to participate in Quilt 2012 events, and serves as domain expert for all digital experiences.

Brett Bobley:  Director and Chief Information Officer, Office of the Digital Humanities, National Endowment of the Humanities; provided expert guidance in the creation of the first iteration of the project and serves as development advisor for the broader Digital Experience Project.