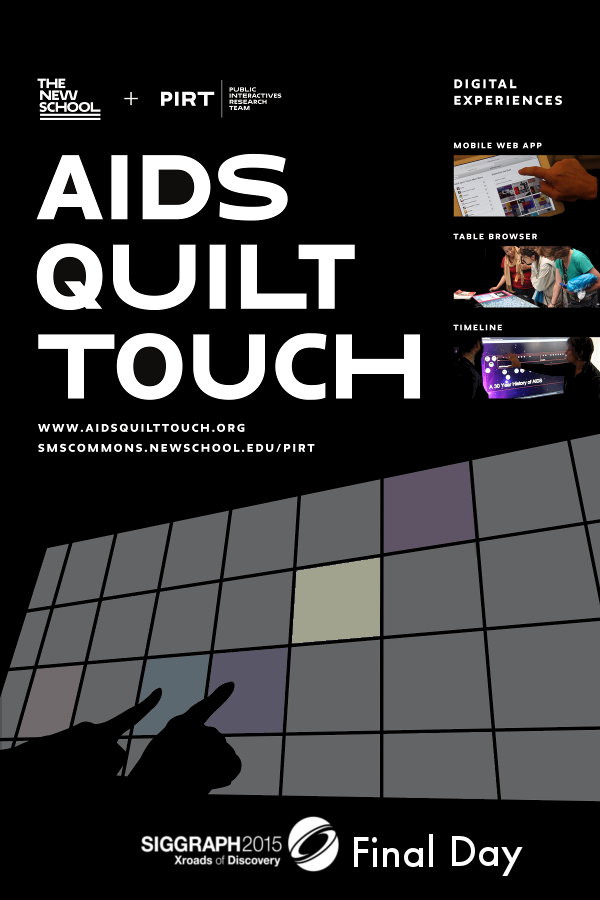 Hi again, everyone! So the dust on our final day at SIGGRAPH 2015 has settled a little bit but not completely. The team definitely has more to share in summation of our experiences during the show. We’ll be posting those in various forms here over the next few days as they become available. For now, check out a video post from research assistant Sean, featuring myself and Letícia describing our experiences in our booth.

A flurry of activity from the show floor as SIGGRAPH 2015 comes to an end. We’ll be posting more once the dust settles here, and we get everything packed up. Bye for now!

A report from research assistant Letícia:

Yesterday we went to the SIGGRAPH’s Animation Festival. We watched two hours of animations, from short movies to game trailers, including pieces of big blockbusters, edited specially to show the visual effects. In an overall reflection, I didn’t see anything particularly impressive. The perfection and beauty of the images are undeniable, however interesting and touching stories were exceptions. What really annoyed me, though, is the lack of representation of people that are not white, male, cisgender, straight, athletic or their romantic interests (objectified skinny white women that are The Standard Beauty and have no personality or will, just serve to the male counterpart). It is 2015, SIGGRAPH and people that make these animations! We need to talk about visibility, representability, and diversity. If VR and CG are supposed to reproduce the reality, why not talk about the real world and its real people of all colors, shapes, genders (or lack of any specific one), expressions, preferences and struggle? I am not even talking about bringing political and social debate into games (yet), for now is just about represent the diversity that the real world is actually about. I feel like the people producing these animations could use a bit of critical theory and/or real world experience in their work.

A report from School of Media Studies Dean and principal investigator for the AIDS Quilt Touch Project Anne Balsamo:

On the last day of the convention, I reflect on the reception of our project here at SIGGRAPH.  Although it will come as no surprise to anyone who has been in the presence of the Quilt, many visitors to our booth were mesmerized by its beauty, scale, and symbolism.  Several people returned every day, just to chat or look again.  Many people knew nothing about the Quilt and were genuinely open and interested to hear of its history and cultural significance.  Many others shared stories of lost loved ones.   It was a quiet place for conversation in the middle of a noisy and technology-saturated convention hall.  It was, also, the only place to reflect on real experiences that haven’t been designed to distract and amuse.  Given the context of SIGGRAPH–one of the largest gatherings of computer graphics professionals–many visitors were intrigued about the interactive Quilt Browser that we displayed on an touch-enabled table.  What I observed consistently was that although many visitors may have walked into the booth to see the technology, they stayed because of the Quilt.

Good morning and welcome to Public Interactives Research Team’s final day of LiveBlog coverage from our booth at SIGGRAPH 2015 in Los Angeles. I’m your moderator, research assistant David Wilson. It’s been a fascinating week and the team is a bit sad that the show is coming to an end. Today’s coverage will feature a wide variety of posts, from final thoughts and impressions we’ll take away from this experience, to our describing what we saw last night at the SIGGRAPH Computer Animation Festival.