By mediastudiestech in Discussion on November 4, 2014

In an article for the journal Places, Shannon Mattern states: “Today, media facades, public screens, ambient interfaces, responsive architectures, and other forms of ‘public interactives’ are transforming our physical environments into interfaces in their own right.” (2014, ¶17). But the question is: How exactly are these devices transforming us and altering our spaces?

The impact of urban screens is as diverse as their formats. They can advertise things, they can entertain, they can teach, and they can trigger feelings and actions in people; in other words urban screens can serve commercial, artistic, educational, and civic functions. During her presentation, Susa Pop declined to indulge in the advertising aspect of urban screens (which was perhaps the most familiar to the audience); she instead dedicated some time to explain some of the projects that are part of Connecting Cities, an expanding initiative that seeks to use media facades, urban screens and projection sites to serve people by displaying artistic and social content: The Mood Gasometer, for example, uses face-recognition cameras to determine the average mood of the passers-by and then displays its analysis in form of emoticons. Human beeing is a projection-mapping project that shows bees’ way of living in order to illustrate and promote the joint work between beekeepers and youth institutions. And Binoculars to… Binoculars from… allows users to explore other countries’ daily life in real time through visors. 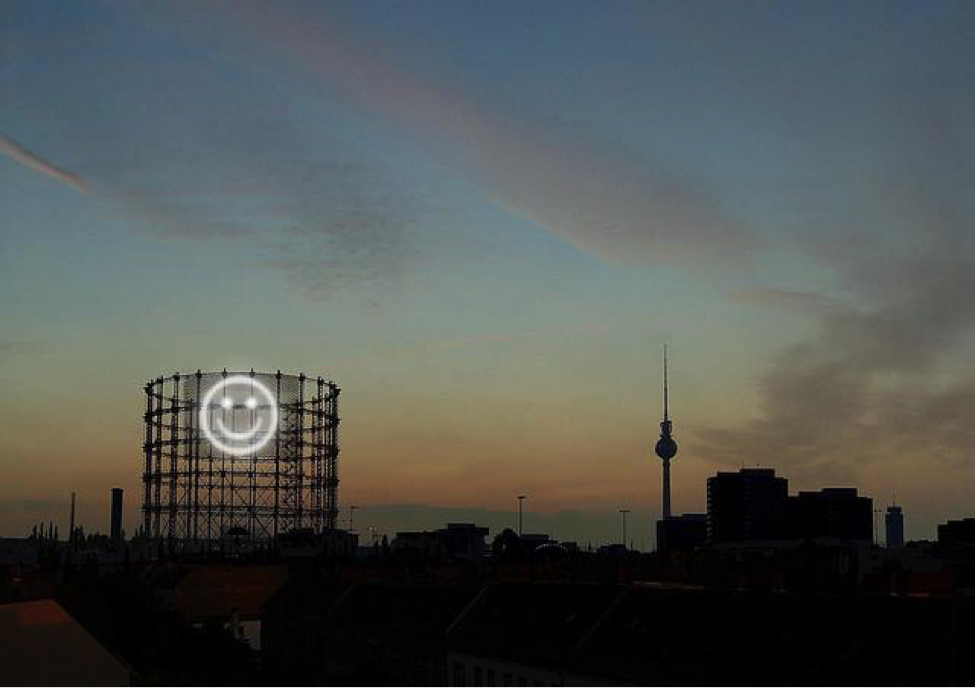 Urban screens have an incredible potential for creative city-making by virtue of urban media art projects that promote a participatory environment in public spaces. Digitized canvases are not only infrastructures that provide aesthetic experiences; they can also foster values, promote collaboration, establish connections between distant cities, and strengthen a location’s collective identity.

Susa Pop’s presentation addressed the power of urban screens as media, by explaining that they can perform two types of mediations: between citizens and urban space, or between citizens themselves. As an example of this, she discussed how in contested spaces urban screens can be “a third space”. The spaces are neutral territories in a specific community where play, discovery, and reconciliation are encouraged. This was demonstrated in different European communities by Telepuppet.tv, which connects migrant populations to their home regions; puppets containing small cameras are sent to their owners’ homelands, and the video they capture is then projected on public screens in the migrants’ new home cities. 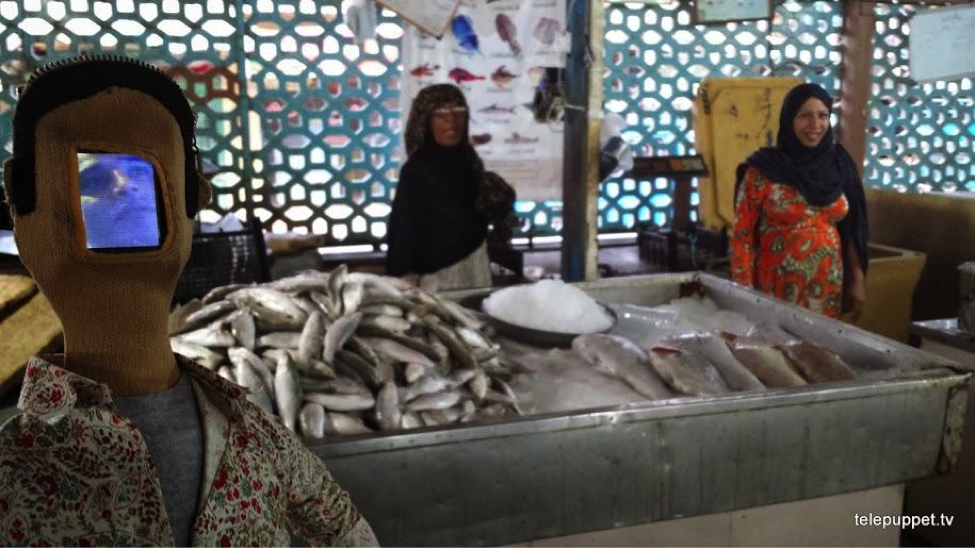 While talking about urban screens as community tools, one idea kept recurring: The success of a project depends on the level of involvement of local citizens. Engaged media makers should always communicate with local citizens in the spaces they utilize in order to determine if their proposal is relevant for the community. There should also be an effort to educate the community about the pragmatics and potential uses of the interface. Finally, they should attempt to incorporate the community’s ideas when possible.

Indeed, one major challenge when talking about urban screens is trying to give voice to citizens rather than just being a public venue for artists to display their work. A true community platform should involve collaboration from the project’s organizers and the locals. To do this successfully decisions must be made regarding when it is optimal to integrate community suggestions and feedback into the process of creating these projects.

There are examples of this type of collaboration. Krzysztof Wodiczko, a renowned Polish video-projection artist, personifies this idea. He calls the small communities that are involved in producing his projects “The Inner Public”. Wodiczko holds that “through its involvement, the Inner Public generates the development and transformation of the projects. In sum, the integrity of any project, in all the stages of its production, including its public reception and its social afterlife, depends on the testimonial role of the project participants and the audience function of the Inner Public.” (2014, p.1). The role local communities in these projects is one of the main issues when reflecting on urban screens as community platforms. However, there are still a number of questions and challenges, such as:

How can we also use these screens as something more than an “mere” aesthetic experience, and use them instead as a social platform?

What role do aesthetics play in more community-oriented or political screen-work? Does the “look” of a project affect the level of impact in/on the community?

How can these projects engage all facets of the community (the interactive audience, the observers, the passers-by, and all socio-economic and geographical demographics) equally in terms of access and relevance?

There is also the issue of longevity from an infrastructure standpoint: will these projects be permanent or temporary? And either can they create a long-term, significant impact for the community?

Funding seems to be also an issue when embarking on these community-building endeavors in America and other parts of the globe. While in Europe government subsidies are often generous, in developing countries the proper infrastructure to develop these kinds of projects does not currently exist. Conversely, in other developed countries the bulk of funding is likely to come from private businesses whose economic motivations may conflict with the ideals behind Susa Pop and her collaborators’ vision for urban screens. Given these scenarios, is it plausible for the projects to exist outside of Western Europe?

As Susa Pop suggests, there are no clear answers yet to some of the obstacles of implementing urban screens in various types of environments. Lack of infrastructure and economic means inhibit pragmatic strides to provide developing countries with these projects. Whereas other developed countries that actually have the means for creating these projects are still dealing with issues such as political and social censorship. But the situation is not entirely hopeless for urban screens to move beyond Western Europe.

Currently, despite certain issues of bringing similar projects to places like the U.S. (which are traditionally more concerned with profit than art or community building) there are some urban screens being used as community platforms in places such as New York City. We provide a list of them here. On this collaborative map, a brief review of the most relevant urban screens projections that have taken place in NYC during the last years. Everything from the veterans taking over Union Square to the Time Square’s Midnight Moment can be found. This should work as a genesis for getting the discussion started on how to further create urban screens in new territories. 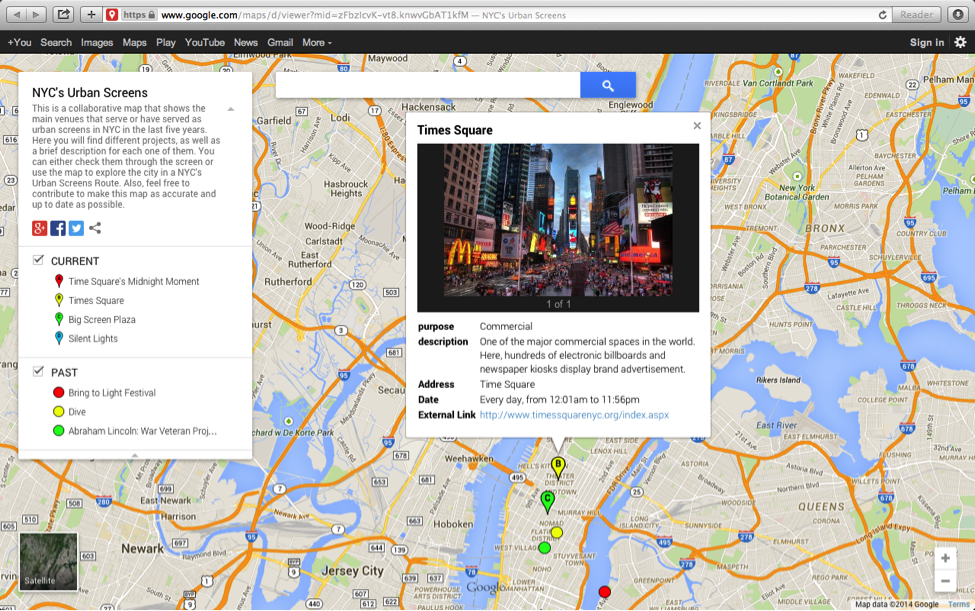 -Interactive Map of NYC’s Urban Screens (screenshot of this: https://www.google.com/maps/d/u/0/viewer?mid=zFbzIcvK-vt8.knwvGbAT1kfM)

Wodiczko, Krzysztof (2014). The Inner Public (Seminar reading for the Graduate Institute for Design, Ethnography, and Social Thought). The New School, 2014.