A Discussion on Mary Flanagan’s Presentation on Games, Design and Values.

With Amanda Kok and Nicholas Turner

Games have evolved with technology – from the traditional dice and card games, to the classic board games, to computer and television console games. The growth and accessibility of games, especially with the rise of smartphones, have led to games playing a significant role in our lives. What I found interesting in Mary Flanagan’s talk was her focus on how gameplay can be a platform to convey values and the power it has to shape people’s beliefs.

I took away the same emphasis on values and what games can do within communities. Though I do not spend much time in my everyday life playing games (save for the subway escape into Candy Crush), Mary Flanagan’s talk generated many questions in my mind such as: How might we think of games as a tool in building a better global society? How can we newly embarked grad students take this concept of personal and societal values within gaming and game design and apply the philosophy of personal responsibility towards improving the conditions of peoples’ lives in our own communities and around the world?

“It is this fruitful tension between concrete and the abstract with which I play to create my work.”

Mary Flanagan is an extraordinary example of entrepreneurship in digital media. Her prominent voice in the world of technology is continuing to break boundaries by investigating technology, specifically games and human dynamics, while focusing on values at play. Some of her work includes “Critical Play: Radical Game Design,” a self-created 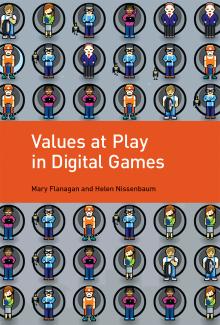 game research lab, Tiltfactor, and her new book, Values at Play in Digital Games, co-authored by Helen Nissenbaum. As she studies the relationships between behavior, tools, play and daily life, Flanagan shines a necessary light on how we can strive to make and use technology more positively. She continues to influence designers and consumers by investigating how the world can be changed through values at play.

Mary Flanagan’s talk at the New School on September 15th, 2014, was an illuminating entryway to the world of game ethics. Mary spoke about her own research on how our value systems influence our game-playing (both video and analog) and also about how we, as a society, interpret values across many of our different media types. Her presentation was a clear introduction to why research methods matter, and why questioning our own values was important to interpreting the media we produce and consume.

For our synthesis of Mary’s talk, we wanted to produce something that might both illustrate her concepts and our own judgements. We decided to create a kind of “game” that you can play within this post. The game is meant to be both a bit confusing and slightly difficult to parse, just as is often the case with our own values.

By mediastudiestech in Discussion on October 26, 2014

Transmedia producer Caitlin Burns has contributed greatly to the world of storytelling, as she has worked on numerous multi-platform stories such as Pirates of the Caribbean and Disney’s Tron Legacy. Undoubtedly, Burns illustrates an understanding of creating and developing successful stories across media platforms, and when she spoke for the Understanding Media Studies Lecture Series, she shared her insights on the matter.

By mediastudiestech in Discussion on November 4, 2014